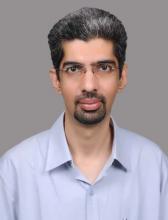 The ever­increasing need for high energies arises from a simple principle of quantum mechanics: to probe the properties of elementary particles at the smallest distance scales, one needs to have a very large transfer of momentum (or energy) between them. While compromising the exactitude of their individual momenta, we gain precision in knowledge of what happens to their interactions as they pass very close to each other. This interaction among elementary particles is one of the most fascinating puzzles that nature has given us to solve: it is what holds the universe together.

My area of expertise is developing particle detectors for high energy physics experiments. In the last few decades semiconductor detectors have taken over the task of detecting nearly all forms of radiation. This spans the vast range from visible light in the ubiquitous digital camera through UV light in solar cells to relativistic charged particles produced in collisions of high energy fundamental particles.

These projects are funded by DST and the Indo-­JSPS cooperative science program. We have also a joint PhD supervision program with Osaka University in Japan. Our group students frequently travel to CERN in Geneva, Switzerland and to Japan to work on their experiments.

Google Scholar lists all my publications.